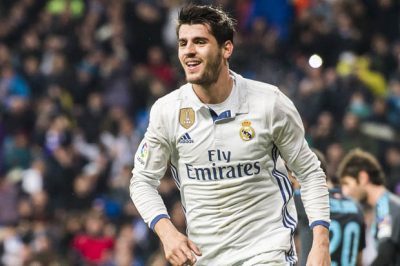 Chelsea have agreed on a deal for the transfer of centre forward Alvaro Morata with Real Madrid, as announced by the club earlier today. With Chelsea announcing Antonio Conte’s new two-year deal yesterday, the latest signing would bring a sigh of relief to the Chelsea fans anxious over their club’s slow transfer activities this summer.

Diego Costa has been unsettled at Chelsea since last summer and all signs pointed towards the Spaniard leaving Chelsea this summer, likely for Atletico Madrid. With Michy Batshuayi still finding his feet in the Premier League and Chelsea competing in as many as four competitions, including the UEFA Champions League, the London club needed to sign a centre forward.

Having lost out on Romelu Lukaku to Manchester United, Alvaro Morata alongside Andrea Belotti and Pierre-Emerick Aubameyang were the few options remaining for the Chelsea board.

Alvaro Morata, a product of the Real Madrid youth academy, was handed his senior debut by Jose Mourinho at the La Liga club and since then, has been on the outskirts of the first team.

With a relatively successful spell at Juventus during which he scored twenty-seven goals in ninety-three appearances, Real Madrid activated the buy-out clause but a star-studded lineup and Karim Benzema’s continued brilliance meant Alvaro Morata rarely had the chance to cement a first-team place.

Extremely effective in his role as a key substitute, with fifteen goals in twenty-six league appearances for Real Madrid last season, the 24-year-old will be a crucial signing for the Premier League champions. At a rumored price of €80m, Morata is a tad expensive, but his technical know-how is undebatable.

Antonio Conte has always been an admirer of Morata’s ability to link-up play and tremendous workrate, and the Italian will definitely help improve the forward’s finishing. With Michy Batshuayi in their ranks, Alvaro Morata could help Chelsea attain the next step in reigning supreme in the Premier League and the European competitions.