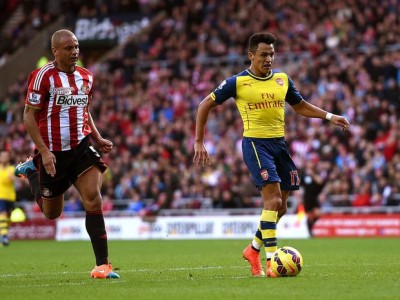 Sunderland are facing Arsenal in their penultimate game of the season, as the Black Cats look to ensure another season of top flight stay. Sunderland are in the 16th position with 37 points. The drastic drop in standards in Newcastle United and Hull City’s results in the second half of the season have allowed Sunderland breathing space, in the relegation battle.

Sunderland come face to face with Arsenal, in less than an hour and will aim to gain at least one point at the Emirates. They finish the season at Stamford Bridge against league leaders Chelsea on Sunday, and in spite of the Champions’ surprising loss at West Bromwich Albion earlier this week, it is extremely unlikely Dick Advocaat’s team will gain a single point at SW6.

Arsenal, meanwhile, would like to solidify their chances of the third place in the Premier League as Arsene Wenger’s men would prefer to avoid the UEFA Champions League qualifiers, which aims to be a tricky affair considering the new pot rules coming into effect next season.

David Ospina, Kieran Gibbs, Per Mertesacker (c), Laurent Koscielny, Hector Bellerin, Jack Wilshere, Santi Cazorla, Mesut Ozil, Alexis Sanchez and Olivier Giroud start for Arsenal. Francis Coquelin gets a well-deserved rest although he will be on the bench. Theo Walcott joins him on the bench.

A measure of a positive result for Sunderland, and the black clouds will further converge on the fortunes of Newcastle United and Hull City.