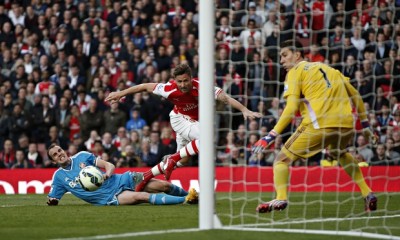 Sunderland clinched a draw at the Emirates to ensure another season of Premier League as the north-east club successfully evaded relegation for the second consecutive season, after inching dangerously close to the drop zone.

Arsenal all but secured the third place and direct qualification to the UEFA Champions League with the one point they earned and Manchester United look likely to face a tricky qualifier to get back to the group stages of Europe’s top competition.

For a game whose result will only be seen as a 0-0 affair in the years to come, there were clear cut chances at both ends and either team could have won all three points. The first half was somewhat of an insipid affair with Arsenal uncharacteristically lethargic in possession and Sunderland understandably cautious. Danny Graham who started for the Black Cats was particularly ineffective and Dick Advocaat’s men started to stamp their authority once Steven Fletcher came on at halftime.

Steven Fletcher scurried away three good chances, but was overall impressive with his link-up play. While Sunderland barely made it out of their own half in the first period of 45 minutes, the inclusion of Fletcher positively contributed to Adam Johnson’s pressing and Connor Wickham’s runs behind the Arsenal backline. Arsenal, who claimed 76% possession of the ball, failed to score in spite of their repeated attacking threats through out the entire 90 minutes.

As has been the case with Arsenal so often this season, Wenger’s men failed to take advantage of their possession as it did not materialize into shots on target. Whenever the likes of Cazorla or Ozil did get it on target, Costel Pantilimon was there to stop it. The Sunderland shot-stopper pulled off one of his best performances of the season and have played a huge role in the north-east club staying up for another season.

The calls for permanent appointment of Dick Advocaat has grown louder among the Sunderland faithful with the temporary manager’s impressive return of eleven points in seven games.