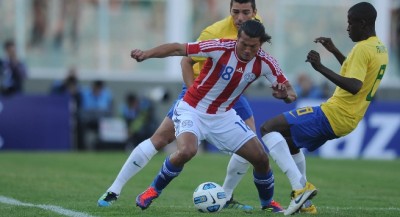 Brazil will face last year’s finalists Paraguay in the final quarter-final game of the 44th edition of Copa America on 27th June, 2015 (Saturday) at Estadio Municipal de Concepcion in Concepcion, Chile. One of the pre-tournament favourites, Brazil had last won the Copa America title in 2007. Two-times winners Paraguay have an outside chance of pulling off an upset. Should Paraguay win, this will be the first time since 1993 when neither Brazil nor Uruguay will make it to the final four.

Brazil won Group C with six points, although they fell to Colombia in a game marred with controversies. Paraguay had a surprising second-place finish in Group B after they went unbeaten through the round-robin stage. Coming back from 2-0 down against Argentina in their opening fixture, Paraguay defeated Jamaica and drew against Uruguay, pushing the defending champions to a third-place finish. As was the case in the last edition, Paraguay have drawn from its determination and good fortunes, to make a deep run into the CONBEMOL-organized tournament.

Neymar is suspended, after a four match ban was handed to him post his involvement in violent acts during Brazil’s match against Colombia. Roberto Firmino, Liverpool’s latest acquisition should start up front while Robinho should also retain his place. David Luiz is expected to start on the substitute’s bench with Dunga preferring Miranda and Thiago Silva as his first-choice centre back pairing.

Ramon Diaz has all the members of his Paraguay squad available for selection, with no injury or suspension concerns.

Philippe Coutinho and Roberto Firmino will be the two key players for Brazil in Neymar’s absence. These two Liverpool players should form the crux of the attacking outlet for the men in yellow.

For Paraguay, Lucas Barrios and Nelson Valdez might keep veteran centre forward Roque de Santa Cruz out of the starting eleven. Paraguay have managed to score goals at various crucial junctures and backed that up with some solid defensive play, and Ramon Diaz will look to set up his side in a similar fashion against Brazil.

According to Head-2-Head statistics, in encounters between the two nations till date, Brazil have won 45% and lost 36% of its matches. The bookmakers favour a Brazil win at 1.7 and a Paraguay win at 6.25. Although this year’s Copa America has been witness to its fair share of upsets, this should be fairly straightforward win for Dunga’s men, with a possible scoreline of 2-0 in Brazil’s favour.