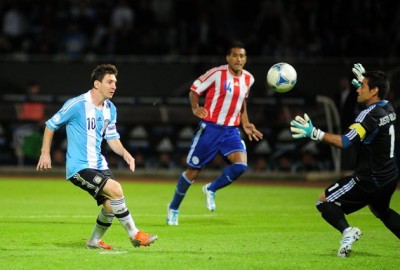 Argentina takes on Paraguay in a Group B fixture of the 44th edition of the Copa America at Estadio La Portada, La Serena on 13th June, 2015.

Argentina boss Gerardo Martino has all the options available with the squad relatively in a clean bill of health. The first choice eleven should feature, although some of the players are carrying minor knocks and Barcelona duo Lionel Messi and Javier Mascherano joined on the back of the UEFA Champions League final.

Paraguay do not have any injury concerns either, so Ramon Diaz should be able to field a starting lineup of his choice.

Argentina are the favourites for this year’s Copa America after their performance in the World Cup last year. Under Martino, the Albiceleste have finally looked like they can achieve their immense potential, with the talented players forming an actual team. Although the Copa America is relatively lower in standards when compared to the World Cup, the current Argentina national squad would love to win a gold medal and cross over the finishing line. With Lionel Messi in sublime form and the likes of Aguero, Mascherano and Tevez in supporting roles, fortunes have never been better for this South American side.

Paraguay made it to the finals of the last edition of Copa America, without winning a single game, under the guidance of current Argentinian manager Gerardo Martino. Soon after, Martino resigned and Paraguayan football has been on a downhill slide ever since. Not only did they fail to qualify for the 2014 FIFA World Cup, but the task of rebuilding has not been a success yet, with the managerial position resembling a musical chair. Ramon Diaz has been on the hot seat for only a few months and is still looking for his first win after three matches.

Argentina have won 58 times out of their 103 previous meetings with Paraguay. Paraguay have won only on 15 occasions, losing the last three encounters by a combined score of 5-12. Any result other than a win for the Albicieleste, it should be a huge upset. Argentina should win the tie by a 3-0 scoreline.