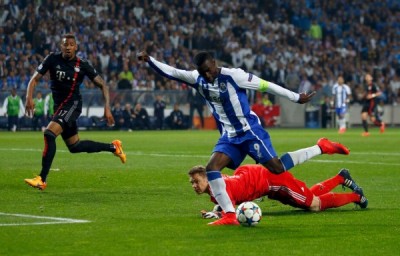 Bayern Munich will welcome FC Porto at the Allianz Arena, Munich as Pep Guardiola’s side look to overturn a two-goal deficit, in a bid to reach the semi-finals of the UEFA Champions League. Bayern suffered a 3-1 humiliation in Portugal in the first leg and will look forward to avenging that defeat.

Bayern Munich’s key players are still suffering from injury. Arjen Robben, David Alaba and Mehdi Benatia will miss the match, as will Javi Martinez who is yet to regain match fitness. Late fitness tests will decide if Philipp Lahm and Juan Bernat play a part. Franck Ribery is likely to be among the substitutes, if Guardiola chooses not to risk him from the beginning.

Porto will be without both their first choice fullbacks, as Alex Sandro and Danilo picked up yellows in the first leg and have to serve their one-game suspension. Jackson Martinez is struggling with a groin injury, but he is expected to feature in the game.

Both sides prefer a 4-3-3 formation. The main contest will be in the midfield and it is to be seen whether Porto chooses to press the Bavarians, like they did in the first leg or decide to sit back to protect their two-goal lead. Julen Argote’s side have a massive task in their hands, because in spite of the deficit, the odds are in Bayern’s favour to progress to the semi-finals.

Porto are undefeated in their last 11 Champions League matches, in 10 of which they have scored a minimum of 2 goals. While playing Bayern Munich at Allianz arena will certainly their most difficult challenge until now, Porto will probably reach the semi-finals, but lose the game 2-1.