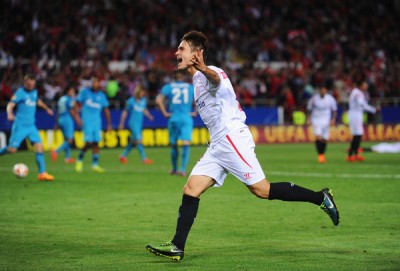 Zenit St. Petersburg welcomes Spanish side Sevilla in the second leg of the UEFA Europa League quarter-finals. Zenit almost registered a surprise win in Seville, but crashed to a 2-1 defeat late into the first leg.

Viktor Faizulin will miss the game due to an injury. Ezequel Garay and Aleksandr Ryazantsev are suspended. Zenit will be boosted by the return of Hulk, Domenico Criscito and Danny, all of whom were sidelined in the first leg through injuries. Daniel Carrico is the only injury casualty for Sevilla, who have a relatively clean bill of health otherwise.

Both sides prefer a 4-2-3-1 formation. Salomon Rondon will start up front for Andre Villas-Boas’ team with Danny, Shatov and Hulk in the attacking midfield. The presence of Javi Garcia and Axel Witsel in the deep midfield allows Zenit to enforce themselves from the middle and create from the back.

Timothy Kolodziejczak is expected to start in central defence, while Stephen Mbia and Denis Suarez may start after they impressed on the weekend, featuring from the substitute’s bench.

Sevilla have won their last six matches in the Europa League, the last four of which they have scored a minimum of two goals.

According to H2H statistics, Sevilla ahve won 40% of its matches against Zenit while another 40% have ended in draws. Due to the one-goal advantage from the first leg, Sevilla hold a minor edge but Zenit are likely to win 2-1 at home, which will take the game to extra time and probably penalties.