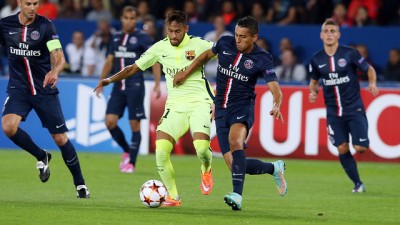 Barcelona host Paris Saint-Germain at the Camp Nou in the second leg of the quarter-final tie of the UEFA Champions League this Tuesday. The first leg ended in a victory for the Spanish side with the Parisians rolling over in a 3-1 defeat.

Thomas Vermaelen is the sole injury concern in Luis Enrique’s side. Although Iniesta has been listed as doubtful for the game, it is likely he will be in the matchday squad. For the visitors, Thiago Silva and Thiago Motta will miss due to injuries. Serge Aurier is suspended.

Suarez is expected to feature up front, alongside Neymar and Lionel Messi for Enrique’s side. Barcelona’s recent defensive frailties will concern Luis Erique for sure and it is to be seen if the Barcelona manager prefers Mascherano to Mathieu as Pique’s partner in the central defence.

PSG are likely to have their first-choice front three present in Zlatan Ibrahimovic, Lucas Moura and Edinson Cavani. It is the Ligue 1 side’s midfield and defense which will suffer in Motta and Silva’s absence. Marquinhos and David Luiz will have added responsibility on their shoulders and the latter will hope to avoid any sort of embarrassing incidents similar to the ones Luis Suarez subjected him to, in the first leg.

Barcelona more or less secured their berth in the semi-finals, courtesy Luis Suarez’s brace in the first leg. Having already won its last seven Champions League matches, the Catalans are on a high and might comprehensively beat Paris Saint-Germain by a 2-1 margin.