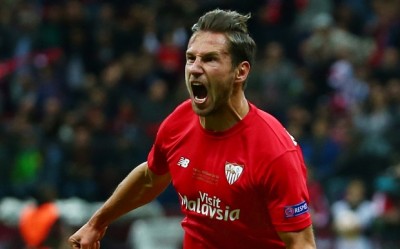 Arsenal are interested in the services of Grzegorz Krychowiak, with Arsene Wenger reportedly being a huge fan of the 25-year-old defensive midfielder. The Sevilla player has a £22m buy-out clause inserted into his contract, which leaves the Spanish club powerless, should Arsenal decide to trigger it.

Arsenal have scouted Krychowiak for the past 18 months and according to The Telegraph, the London club’s scouts were present at Sevilla’s UEFA Super Cup tie against Barcelona in Tbilisi to assess the player. Krychowiak has been one of the rising stars of La Liga, the defensive midfielder racking up 82 tackles and 97 interceptions in 32 league appearances last season. A key figure in Unai Emery’s UEFA Europa League winning side, Krychowiak is also strong in air.

Although Francis Coquelin’s rise to prominence after returning from his loan spell at Charlton relieved Wenger’s worries, Krychowiak’s addition will uplift the Gunners from being a mere contender to favourites for the Premier League title. As the loss against West Ham United on Sunday demonstrated, there is still work to do and adding a quality player into the mix will not only add depth into the squad, but also push the players in the current first choice eleven to strive harder.

Arsenal only have the 34-year-old Tomas Rosicky and the injury prone Jack Wilshere for depth in deep central midfield at the moment. Speculations in European press suggest Arsenal will lodge a bid next week, with the player being open to a Premier League club, regularly competing in the UEFA Champions League.