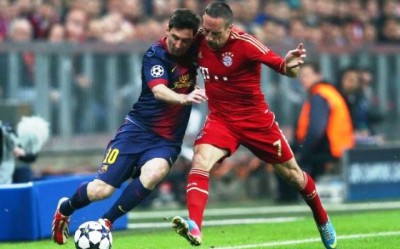 Bayern Munich welcome Barcelona to Allianz Arena in the second leg of the UEFA Champions League semi-finals, after the Catalans inflicted a crushing 3-0 defeat on the Bavarians in the first leg last month.

Bayern Munich and Pep Guardiola have to deal with numerous injury concerns. David Alaba, Arjen Robben, Holger Badstuber, Franck Ribery, Tom Starke and Sebastian Rode will all be absent tomorrow. Robert Lewandowski, although doubtful due to his facial injury, might have to start in absence of better options. Luis Enrique’s Barcelona side will be at their full strength as they have a relatively clean bill of health. There are no suspension concerns as well.

Philip Lahm might move back to defense in Bayern’s 4-3-3 with Javi Martinez, Xabi Alonso and Thiago Alcantara donning their regular roles in the midfield. Jerome Boateng and Mehdi Benatia will resume their services in the heart of the defense, although Lionel Messi tore both central defenders a new one, during the first leg at Camp Nou. In absence of both Arjen Robben and Franck Ribery, Mario Gotze and Thomas Mueller are expected to take up the wide roles in support of Robert Lewandowski up front.

Barcelona have an extremely settled 4-3-3 in comparison to Bayern’s eleven. While Marc-Andre ter Stegen will assume his cup duties for the Spanish side, the outfield players will be the same who took the field in the first leg. Lionel Messi will be ably complemented by Luis Suarez and Neymar on either flank. Ivan Rakitic, Sergio Busquets and Andres Iniesta form a dynamic trio in the middle of the park with their individual strengths combining to allow the team to create chances with lightning-fast precision and stopping the opponents far from the danger zone. Dani Alves, Gerard Pique, Javier Mascherano and Jordi Alba will form the Catalan backline.

Barcelona have won their last nine matches in the UEFA Champions League and that trend looks unlikely to be broken tomorrow. Although Bayern Munich came back from the brink of elimination against Porto, the Spanish side is a completely different element than their Portuguese opponents in the previous round.

The bookmakers favour a Barcelona win at 2.7, a draw at 3.75 and a Bayern Munich win at 2.6. Recent performances indicate a downhill surge for the Bundesliga champions as they have lost their last four competitive fixtures. On the contrary, Barcelona have been on a roll, cruising through their La Liga games. The second leg is likely to end in a 1-0 win for the Spanish side, one which will propel them to the finals of the UEFA Champions League.