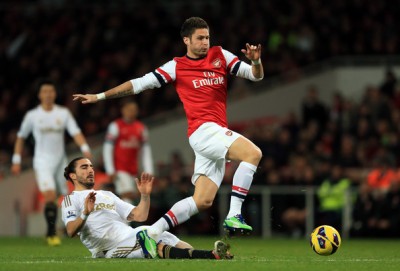 Arsenal take on Swansea City at the Emirates on Monday as the Gunners aim to overtake Manchester City in the race for the second place on the Premier League standings. Manchester City went up to 73 points after they crushed QPR, but Arsenal are on 70 points having played two games less. Swansea City are eighth with 53 points, after 35 games.

Arsene Wenger has confirmed Danny Welbeck will miss the game through injury. While Aaron Ramsey and Mathieu Debuchy will face late fitness tests, Mikel Arteta and Alex-Oxlaide Chamberlain are in fear of missing out completely due to a lack of match fitness.

The visitors have quite a few injury concerns in their side. Garry Monk will have to do without the services of Tom Carroll, Kyle Naughton, Bafitembi Gomis, Wayne Routledge and Jordi Amat. Nelson Oliveeira is also a doubt after he picked up a niggle against Stoke City last week.

Arsene Wenger is expected to field his full strength eleven in a 4-2-3-1. While Olivier Giroud will be the targetman with Alexis Sanchex, Mesut Ozil and Jack Wilshere backing him up in creation of chances, Santi Cazorla and Francis Coquelin are expected to feature in their rendition of Arsenal’s unique double pivot.

Gylfi Sigurdsson, Marvin Emnes and Jefferson Montero will be the front three while Ki Sung-yeung returns to the 4-3-3 midfield along side Jack Cork and Jonjo Shelvey. Angel Rangel, Federico Fernandez, Ashley Williams and Neil Taylor will resume their duties in the back four of the Swans lineup.

Arsenal have scored 66 goals this season, with 291 of its shots coming from within the box, while the Gunners have conceded only 33 goals and 205 shots from within their own penalty box.

Alexis Sanchez has been the key player in association with Santi Cazorla with the former netting 16 times and providing 8 assists in the Premier League.

According to H2H statistics, Swansea City have won a substantial 38.5% of its matches against the Gunners. Arsenal have come on top in three of their last six meetings with Swansea, but lost the previous encounter by a 2-1 margin. Also, Arsenal have won 9 of their last 10 Premier League matches and 11 of their 16 home league games this season. Consequently, the odds favour an Arsenal win by 1.3, a draw by 6.00 and an Arsenal loss by 13.00. Although Swansea City defeated Stoke City 2-0 in their last game, Arsenal are in a tremendous form and expected to beat Swansea City by a 3-0 margin.