Aston Villa Knock Liverpool Out Of The FA Cup 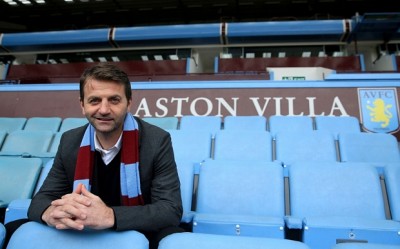 The magic of the FA Cup was in full swing at Wembley on Sunday as Aston Villa knocked out Liverpool, winning 2-1 and securing their place in the finals against Arsenal. Not even the passionate of Villa fans could have envisioned the story which unfolded last night, with Tim Sherwood’s side coming back from behind to win the tie. Aston Villa were struggling on all aspects when Sherwood took over the reigns from Paul Lambert earlier this year. Since then, Villa’s fortunes have been on the rise and now they will contest in their first FA Cup final in 15 years.

Aston Villa started in a 4-3-2-1 with Jack Grealish and Charles N’Zogbia both functioning as No. 10s for Sherwood’s side. Brendan Rodgers set up his team in the usual 3-4-3 but changed the formation halfway into the first half, after Villa had gained a stronghold on the proceedings. Steven Gerrard’s inclusion did not do any favours to either the manager or the Liverpool legend, as questionable tactical instructions led to a shoddy performance from the Englishman. Liverpool looked comfortable only prior to Philippe Coutinho‘s opener in the first half, which looked more like an aberration, when contrasted to how the rest of the game played out.

The trio of Fabian Delph, Christian Benteke and Jack Grealish were pivotal to Villa’s cause, as it was demonstrated in both goals. While Benteke chose to make the life of Emre Can, the makeshift central defender, miserable, Grealish operated in the pockets of space between Liverpool’s centre halves and central midfielders. Fabian Delph’s workrate and will to run beyond his team-mates was instrumental in both the goals. Delph is a fine footballer when he has the ball on his feet, an industrious captain off it. His runs from the left of the midfield into Liverpool’s danger zone were not picked up by any of Liverpool’s players and the mistake cost them dearly.

Rodger’s tactics this season have been baffling, to say the least. Chopping and changing formations, lack of clarity in gameplan, failure to get the best out of his players – the signs have not been promising. The Liverpool manager might argue that the Kops got unlucky, for Mario Balotelli‘s goal was wrongly disallowed (for offside) and Kieran Richardson cleared Steven Gerrard‘s header off the line, late into the second half. But as Tim Sherwood would say and has proved time and again over the last few months, “Fortune favours the brave.”