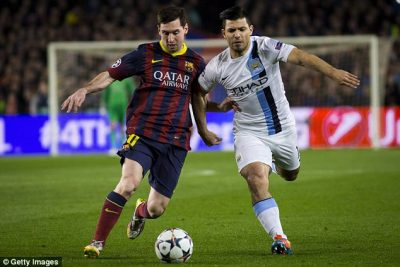 Barcelona vs Manchester City – Pep Guardiola returns to El Camp Nou on Matchday 3 of the UEFA Champions League when Manchester City take on Barcelona in a Group C fixture on 19th October, Wednesday.

Manchester City are on the second place with four points while Barcelona lead the group with six points. While a win would be the most ideal result for the English Premier League club, they must avoid a loss at all costs. A City loss could allow Celtic (who have one points and play Borussia Monchengladbach at home) to close the gap.

Jasper Cillessen is sidelined through an injury. Jordi Alba and Sergi Roberto are both carrying muscular injuries and will face late fitness tests.

Manchester City will be without Bacary Sagna and Fabian Delph.

“I have never thought about the next game thinking a draw would be a good result. Of course it is complicated. No win in Glasgow means we have to take points off Barcelona there or here, and especially in Germany as well.

We have four games left, we have to win two. We have to make six points to be in the next step. We are going to try to win the first points in the next game. That is sure.”

Barcelona are likely to win 3-1.