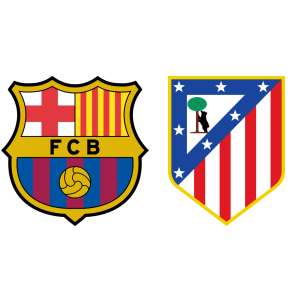 Barcelona sit atop the La Liga with sixty-six points after twenty-six matches while the second-placed Atletico Madrid have sixty-one points after an equal number of matches.

Barcelona are unbeaten throughout their domestic league campaign, but Atletico Madrid are in excellent form with eight wins in their last ten league games. Diego Simeone’s side defeated Leganes 4-0 in their previous game while Barcelona could only manage a 1-1 draw against Las Palmas in their last league outing.

Sergi Samper and Nelson Semedo are sidelined through injuries while Atletico Madrid will be without Stefan Savic and Lucas Hernandez.

“FC Barcelona and Atletico Madrid are two strong teams who are fighting for the title. The three points are highly valuable, because it’s a game between teams in first and second place.

The defend very well, both at the back and when they press high. They are very dangerous on the counter as well, as they use space very well. They have great passers of the ball, such as Koke, and we will have to watch out for these situations.”

According to Barcelona vs Atletico Madrid H2H Stats, the last five matches between these two clubs have resulted in three draws and two wins for Barcelona. In fact, Barcelona are undefeated in their last 17 home matches against Atletico in all competitions.

It should be a closely contested affair but a 1-0 win for Barcelona is the most likely result.