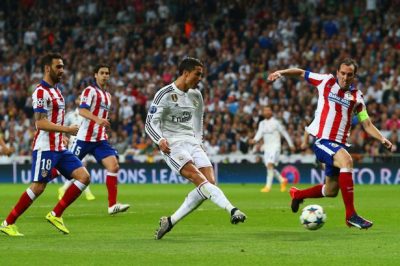 Atletico Madrid are fourth in the La Liga standings with twenty one points courtesy their six wins from eleven matches, leading Sevilla by goal difference only. Two losses in their last three matches, to Sevilla and Real Sociedad have slightly hurt the titular chances of Diego Simeone’s side.

Real Madrid have twenty seven points from eight wins, ahead of rivals Barcelona by two points. A win against Atletico Madrid on this weekend could set the pace for Zinedine Zidane’s side going into a hectic phase before the winter break.

Antoine Griezmann picked up a foot injury during the international break. Although initial concerns regarding a fracture was dispelled following scans, the Frenchman is unlikely to feature on Saturday. Augusto Fernandez is Atletico Madrid’s long-time injury concern while Alessio Cerci has been listed as a doubt. Nicolas Gaitan and Andre Moreira have returned to training and could be a part of the matchday squad.

For the visitors, Pepe and Toni Kroos are sidelined through injuries. Sergio Ramos and Karim Benzema have been deemed fit and are likely to start. Casemiro, Mariano Diaz, Marco Asensio and Martin Odegaard will face late fitness tests.

According to Atletico Madrid vs Real Madrid H2H stats, the last five league encounters between these two clubs have resulted in two wins for Atletico Madrid and three draws. In fact, Real Madrid have not defeated their derby rivals in a La Liga fixture since the 2012/13 season.

The last competitive fixture between these two clubs came in the 2015/16 UEFA Champions League final when Real Madrid won on penalties. The match on Saturday should be a closely contested affair and a 1-1 draw is the most likely result.