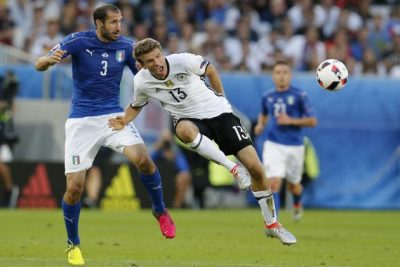 Italy vs Germany – Italy hosts Germany at the San Siro on 15th November, Tuesday in an international friendly. Italy and Germany secured comfortable victories in their respective 2018 FIFA World Cup qualifiers last week, Italy winning 4-0 against Lichenstein and Germany all but annihilating San Marino in a 8-0 goalfest.

Italy and Germany have had a long history of football rivalry. While Germany had not won against Italy in a long time before their 4-1 victory at Munich this past March, now Joachim Loew’s side are unbeaten in their previous three matches against Italy – one of which was the 2016 European Championship quarter-final win on penalties.

Antonio Candreva and Eder are listed as doubts for the Italy squad. Gian Piero Ventura is likely to field an unchanged starting eleven from their last game.

Manuel Neuer, Toni Kroos and Julian Brandt had withdrawn from the squad due to injuries, while Andre Schurrle, Julian Draxler and Jerome Boateng were ruled out before the international break.

They are always difficult matches. Italy is a very tough opponent — a squad that can trouble us, like other strong teams. It [Germany squad] is a right mix between new faces and players with more experience. There is a great team spirit, a great working spirit, so that can only make us hopeful for a rosy future.”

According to Italy vs Germany H2H stats, the last five matches between these two nations have resulted in two wins for either side and a draw. It should be a closely contested affair and Germany are likely to win by a 2-1 scoreline.