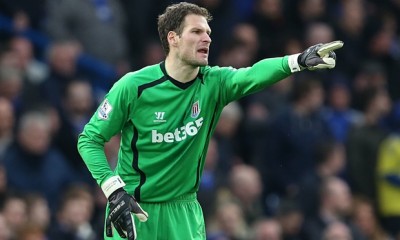 Asmir Begovic will join Premier League champions Chelsea in a deal worth £8m, which will see Dutch midfielder Marco van Ginkel move to Stoke City on a season long loan. Begovic is set to take over the role of Thibaut Courtois’s deputy, after Petr Cech secured a transfer to Arsenal earlier this month.

Jose Mourinho and the Chelsea board had identified Begovic as the ideal replacement for Cech long back, but Stoke City had denied an initial bid worth £6m. The 28-year-old Bosnia and Herzegovina international had joined Portsmouth ten years back and went through a series of loans to earn his work permit. Stoke City brought in Begovic in January 2010 as an understudy to Thomas Sorensen for a meagre sum of £3.25m, but the goalkeeper has proved his worth more than once.

One of the mainstays of the Stoke City squad, Begovic has played a crucial role in the Potters being a constant mid-table force over the last few seasons and even won the club’s Player of the Year award in 2012/13.

Jack Butland will be Stoke City’s No. 1 henceforward as the England U-21 international is more than capable of being the first choice goalie at a Premier League club. Stoke City have also signed Shay Given as a backup to the young keeper.

As for Chelsea, the champions could not have asked for a better replacement for Petr Cech. Begovic is a reliable, Premier League tested keeper and relatively young for a goalkeeper. At 28, Begovic has at least five years of service in him and will provide Chelsea with a safe pair of hands, even if Thibaut Courtois is unavailable at some point of the season.

The goalkeeper is expected to undergo a medical and complete his signing by this weekend.