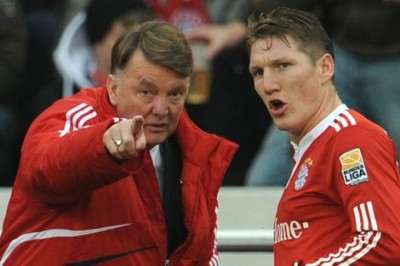 Manchester United and Louis van Gaal have pulled off a couple of coups in the transfer market, snapping up Bastian Schweinsteger and Matteo Darmian. The medicals are pending and both players are yet to put pen to paper, but the contracts should be sealed in the next few days.

Karl-Heinz Rummenigge, Bayern Munich’s chief executive lamented the loss of Schweinsteiger who made his way into the club through the youth ranks and has been a regular feature in the Bundesliga side for the last eleven years. Rummenigge also spoke about Bastian’s immense contribution to the club and how the German midfield general wanted to test himself with a new challenge at this stage of his career. A winner of eight Bundesliga titles and seven German cups, Schweinsteiger had only one year remaining on his contract. Bayern will receive a transfer fee of £15m, while the player is set to earn £140,000 per week at his new club.

Louis van Gaal has looked to bolster his squad in all positions this summer, as Manchester United aims to challenge for the Premier League title after a span of two topsy-turvy seasons. United have already secured the signing of Memphis Depay, the new poster boy for exceptional attacking talents and Schweinsteiger’s signing affirms the club’s return as a transfer market mogul.

Manchester United have also agreed a deal with Torino for Matteo Darmian for a fee around £13m. The fullback has impressed for the Serie A club in the last few seasons, and United who have been long-term admirers of Darmian finally secured the young Italian. A product of the world-renowned Milan youth system, the 25-year-old is one of the rising stars in his position. Known for his dynamism on pitch, he is comfortable while bursting forward to link-up play as well as while defending against pacy, tricky wingers. His tactical flexibility and positional awareness along with his strong physical attributes make him a perfect fit for United’s system who struggled at right back last season.

Manchester United have also had a £20m bid rejected for Southampton’s Morgan Schneiderlin, with the Saints holding out for a fee closer to £27m. Should Manchester United be able to secure the services of the Soton midfielder, Manchester United will boast of one of the strongest first-choice midfield in the Premier League, one which allow Louis van Gaal to implement his tactics.

Manchester Untied’s swiftness and intent in the transfer market is a sign of the shift in approach from the last couple of seasons, one which would once again establish the Red Devils as a powerhouse in Europe.