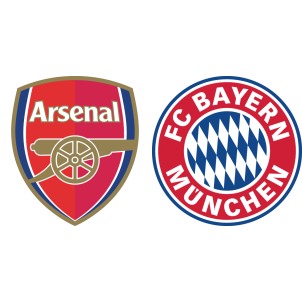 Arsenal vs Bayern Munich – Arsenal host Bayern Munich at the Emirates in the second leg of their UEFA Champions League Round of 16 tie on 7th March, Tuesday.

Arsenal were beaten 5-1 in the first leg at the Allianz Arena and are all but knocked out of contention for qualification to the quarter-finals, but in light of their recent results, this match is a crucial test for Arsene Wenger – for if Wenger loses, the calls for his departure at the end of the season will grow stronger.

Arsenal lost 3-1 to Liverpool in the weekend while Bayern Munich defeated FC Koln 3-0 in a Bundesliga fixture.

Santi Cazorla, Mohamed Elneny and Mesut Ozil are sidelined through injuries. The visitors will be without the suspended Philipp Lahm. Renato Sanchez, Douglas Costa and Jerome Boateng will face late fitness tests.

“Look we missed 45 minutes at Bayern Munich and we have an opportunity to put it right. Let’s not fool ourselves, we have a one or two-percent chance. But you never know. That’s why we have to focus on the quality of our performance and our commitment.”

According to Arsenal vs Bayern Munich H2H Stats, the last five matches between these two clubs have resulted in three wins for Bayern Munich, one win for Arsenal and one draw.

Arsenal are in a poor stretch of form, having lost four of their previous six matches in all competitions. Bayern Munich, on the contrary, have failed to win only two of their last sixteen competitive fixtures.

Arsenal will once again start as underdogs but will play to salvage their pride. A 2-2 draw is the most likely outcome of this game.