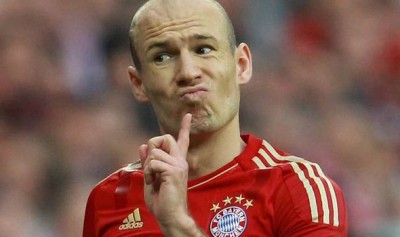 Arjen Robben has been ruled out of action for four weeks after the Bayern Munich winger picked up a thigh injury while on international duty. Arjen Robben had to be substituted off during Netherland’s 2016 UEFA Euro qualifier against Iceland on Thursday after just 30 minutes, as the winger struggled to continue play.

Tests by Bayern’s club doctor Volker Braun revealed an injury in the left adductor muscle, which will sideline Robben for at least a month. The 31-year-old has a lengthy history of injuries and missed 18 matches last season. Muscular problems have troubled Robben since his early days in professional football and Bayern Munich can only hope this groin injury won’t affect his form in any way.

Arjen Robben is set to miss Bayern Munich’s first two UEFA Champions League group stage matches against Olympiakos and Dinamo Zagreb. Netherlands, who suffered a 1-0 defeat to Iceland, will have to be without Robben during their trip to Turkey.

Pep Guardiola’s side has been severely hit with injuries as the squad has been stretched thin in the early days of the season. While the club bought Douglas Costa to bolster its forward line, it is expected Guardiola will assign Thomas Mueller on the right wing in Robben’s absence, as Franck Ribery is also missing due to an injury picked up last season.

Bayern Munich have made a winning start to the season, accumulating nine points off the first three matches, but there have been worrying signs, especially in the defence. The Bundesliga champions will face FC Augsburg on the other side of the international break.