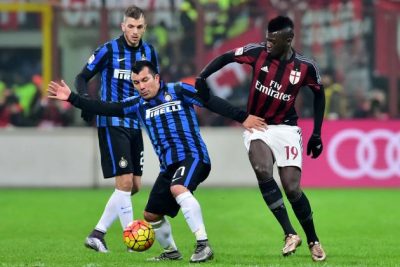 AC Milan vs Internazionale – The latest edition of Milan Derby sees AC Milan take on Internazionale at the San Siro in a Serie A fixture on 20th November, Sunday. Both clubs have had contrasting starts to their season – AC Milan are third in league standings with twenty six points from twelve games. Inter Milan are tenth with only seventeen points from their five wins.

While Inter have won only two of their last six league matches, their 3-0 victory over twentieth placed Crotone providing the legendary club some respite. Stefano Pioli was appointed during the international break and the match against AC Milan will be his first in charge.

Andrea Bertolacci, Riccardo Montolivo and Davide Calabria are sidelined through injuries for AC Milan while Alessio Romagnoli will face a late fitness test. Internazionale will be without the suspended Andrea Ranocchia. Cristian Ansaldi and Rodrigo Palacio are listed as doubts as well.

“Inter are a prestigious club with a great history so it’s absolutely vital that we play with passion. We must leave every last ounce of energy on the pitch.

We must aim to catch our opponents off guard and to stretch them. We want to play attacking football but it’s not how many strikers you have that determines how dangerous you are.”

A 1-1 draw is the most likely outcome of this match.