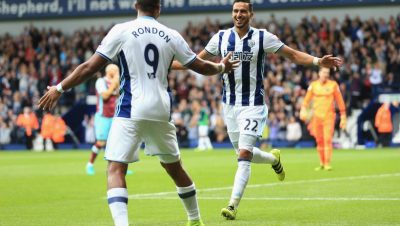 Having beaten of Leicester City 2-1 away from home before the international break, ended their five-match winless run, Tony Pulis’s side must be in full confidence hosting Sean Dyche’s Burnley FC at the Hawthorns tonight. Burnley has a bad record at the Hawthorns, failed to win in league away at the ground since December 1969. Burnley have lost eight of their 9 matches on the road, but they head into the Monday night in high morale after undefeated in three matches, which included two wins and an impressive draw away at Manchester United.

West Bromwich sat twelve on league table after collecting thirteen points from eleven matches, one points less and one position lower than their opponents. A win for West Bromwich will lift them up to ninth position, above FC Bournemouth. The trip to the Hawthorns will be the first of three away games for Burnley against clubs currently below them in the table so like West Brom this is a crucial stage of the season.

Team news:
Salomon Rondon expected to return for West Bromwich for this match. The striker has recovered from the hamstring injury after missing out Venezuela’s World Cup qualifying matches against Bolivia and Ecuador. Nacer Chadli will not playing in this match after a minor knee surgery. Saido Berahino still not fully fit but is near to his return, not playing since September 2016.

Stephen Ward is pushing to return to Burnley’s starting line-up for the trip to West Brom. The Ireland defender missed the win over Crystal Palace due to hamstring injury but has trained this week ahead of this match.

Key statistics:
West Bromwich have conceded at least one goal in their last eight league matches, where those matches finished up with over 2.5 goals scored in total.

West Bromwich conceded at an average of 1.8 goals in their home matches.

There have been over 2.5 goals in West Bromwich’s last 8 games against Burnley FC in all competitions. 9 of 12 Burnley’s away matches had over 2.5 goals scored in total.

emres1983’s prediction
I actually think this will be a really, really good game, one of those games that both clubs look back on at the end of the season. Although both teams not a really good in attacking, still a match between them has produced lots of goals.