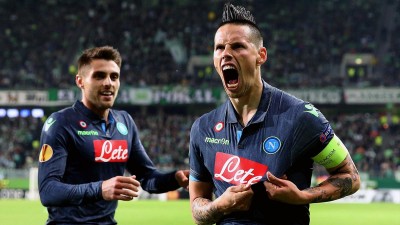 Bundesliga side Wolfsburg travel to Italy to face Napoli, who crushed them in a 4-1 defeat at home in the first leg of the UEFA Europa League quarter-finals. The German side has an uphill task on its hand as it needs to score a minimum of four away goals, to progress to the semi-finals.

Rafael Benitez’s side will be without Michu and Walter Gragrano, who are recuperating from injuries. Ivan Strinic is also cup-tied. For Dieter Hecking, this game could be an opportunity to rest his players before the crucial league game against Borussia Monchengladbach, whom Wolfsburg play in the weekend. Kevin de Bruyne is likely to sit out due to a foot injury. Andre Schurrle is listed as doubtful due to a shoulder injury. While Aaron Hunt is close to a return and may be named on the substitute’s bench, Luiz Gustavo and Vieirinha both have knocks and late fitness tests will decide their availability.

Napoli will be seen in a 4-2-3-1 with Gonzalo Higuain up front, with Dries Mertens, Marek Hamsik and Jose Callejon assisting him from the midfield. Wolfsburg have been one of the surprises of the season, but despite their shocking loss at home against the Italian side in the first leg, Hecking’s side is likely to feature in their usual 4-2-3-1. Absence of key players through injuries might allow the rest of the squad to see some game time.

It will take nothing less than a miracle, for Wolfsburg to progress to the next round. Napoli might clinch this fixture as well, in a 2-1 win.