Who Will Be Liverpool’s New Manager? 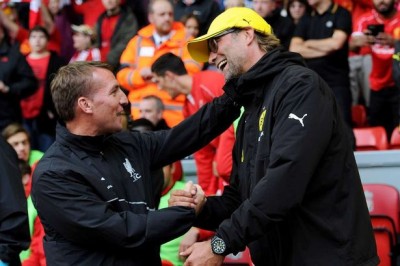 Liverpool is on the look-out for a new manager, with Jurgen Klopp being the most likely candidate for taking over the reins at the Anfield club. Brendan Rodgers was sacked by the Fenway Sports Group in light of Liverpool’s 1-1 draw against Everton, as results were particularly underwhelming.

Brendan Rodgers’ highlight as the Liverpool manager was their second place finish in the English Premier League in the 2013/14 season. But Rodgers failed to lead Liverpool to glory as their fans would have loved. In spite of spending a considerable sum of money in transfer windows throughout his reign, Rodgers’ lack of consistency and sub-par results brought his downfall.

Jurgen Klopp’s availability prompted the FSG conglomeration to look for a new manager, in order to salvage Liverpool’s season. Klopp’s methods of man-management and his success with Borussia Dortmund have been regaled about in the last few years and it seems likely the German will be keen to manage a Premier League club.

The Guardian reports talks are moving forward between the club and Klopp’s representatives and the Kops could have him as their new manager even before the international break ends. Should Klopp join, his former assistant at Dortmund Zeljko Buvac and coach Peter Kraweitz will also join Liverpool. It does put a question mark on the futures of Sean O’ Driscoll and Gary McAllister who continue to remain at the club.

Brendan Rodgers meanwhile released a statement citing his disappointment over the end of his working relationship with the club and wished Liverpool the best.

“I am, of course, incredibly disappointed to be leaving Liverpool football club. It has been both an honour and a privilege to manage one of the game’s great clubs for the last three years.”