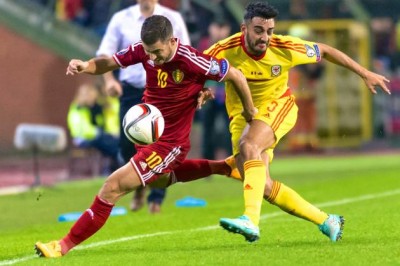 Wales host Belgium in a ‘Group B’ top of the table clash for UEFA Euro 2016 Qualifiers on Friday evening. Both nations are on 11 points after 5 matches and all set to progress to the final tournament in France next year. The match will kick off at Millennium Stadium in Cardiff on 12th June, 2015 at 18:45 GMT.

Belgium will be without Marouanne Fellaini who scored a brace in the last game. The midfielder suffered a pelvic injury on Wednesday and pulled out of training immediately. Vincent Kompany is serving out a suspension and will miss the game. Jason Denayer is also doubtful after he was unable to complete training ahead of the game.

Chris Coleman has brought about a refreshing change in the Wales squad ever since his appointment. From the drudgery of missing out on World Cup qualification to just one loss in ten games over the last two years, Wales are mere steps away from qualifying for an international tournament for the first time since 1958. In the process, the Welsh team has also achieved their highest ever FIFA ranking of 21. Blessed with a young, talented squad, Coleman has worked wonders and would look to battle for supremacy in Group B when his players take on Belgium tomorrow.

Belgium’s international plaudits in the last few years have been even more remarkable. Not only did the Red Devils qualify for FIFA World Cup 2014, but also suffered a single loss at the hands of eventual runners-up Argentina. That defeat was the only one suffered by Marc Wilmots’ side in the last seventeen games. Belgium’s Golden Generation comprising of Eden Hazard, Kevin de Bruyne, Toby Alderweireld, Thibaut Courtois, Christian Benteke will set the stage alight, as they fulfil the expectations of Belgium.

Both nations have previously faced each other on nine occasions, Belgium winning four times and Wales winning twice. This will be a closely contested fixture, but Belgium are likely to edge out Wales by a 3-2 margin.