← Chile vs Peru – Copa America Semi Final – Preview
Who Are The Favourites For 2015 Wimbledon? → 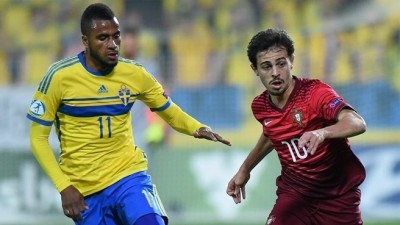 Sweden and Portugal will battle for their maiden UEFA Euro U-21 title when the two teams take on each other at Eden Stadium in Prague, Czech Republic on 30th June, 2015 (Tuesday). The two teams faced each other just six days back, in the final Group B fixture, which ended as a 1-1 draw.

Joseph Baffo was rested in the semi-final because of his shoulder injury, but Håkan Ericson is expected to include the defender in the starting lineup in the final. For Portugal, Tiago Ilori is the serious injury concern, after the centre back’s thigh injury recurred during warm-up before the semi-finals against Germany.

The sheer amount of quality in the Portuguese squad has shone through time and again in Czech Republic. Their creative flair has been well complemented by their defensive solidarity, with goalkeeper José Sá at the heart of Portugal’s best defensive record in the competition. Rui Jorge has instilled a sharpness among Portugal’s youngsters and drilled in an offensive style of play which can beat any opponent on its day.

Bernardo Silva and William Carvalho have been the crux of Portugal’s creativity. Most of Portugal’s attacks have been channelled through these two midfielders and the supporting cast have stepped up, dismantling opposition with precision.

Sweden have written one of the most fascinating stories in this year’s UEFA Euro U21 competition. From being a goal and a man down within the first thirty minutes in the opener against Italy to the finals, Håkan Ericson’s side has shown cleverness and grit in beating some of the best U21 sides in Europe.

Team cohesion has been Sweden’s biggest strength this summer and the underdogs are well capable of pulling off an upset with their ‘result-oriented’ style of play. John Guidetti is the key player in the Sweden squad. The forward possesses an air of assurance and panache, which automatically uplifts the rest of the Sweden squad.

Portugal will head into the final as favourites. In seven competitive fixtures at the U21 level till date, Portugal has won two and lost three. The current U21 side has some of the best talent to ever come through the Portuguese ranks and should win comprehensively. However, as Sweden has repeatedly shown, proving their mettle in the process, Ericson’s charges can beat the best with their pragmatic approach. It should be a closely contested affair, but Portugal should prevail on a 3-2 scoreline.