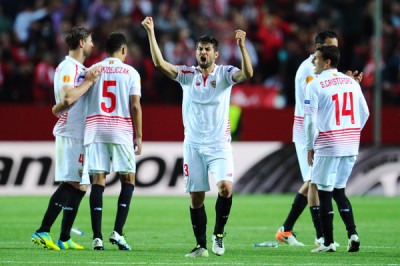 Shakhtar Donetsk hosts defending champions Sevilla at Arena Lviv on 28th April, Thursday in the first leg of their UEFA Europa League semi-finals. As the Spanish club aims for its third consecutive Europa League title, the Ukrainian club has to play 800 km away from their home stadium due to ongoing political tensions in Ukraine.

Shakhtar Donetsk would be looking to avenge their nine year old loss to Sevilla in the same competition but must be at their absolute best against Emery’s side who have a knack of performing impressively under pressure in this competition.

Sevilla defeated Swiss club Basel and fellow Spaniards Athletic Cub Bilbao in their previous rounds while Shakhtar Donetsk had to get past Anderlecht and Sporting Braga.

Marcio Azvedo is Shakhtar’s only injury concern. Yaroslav Rakitskiy is all set to return from suspension. Sevilla will be without the injured Marco Andreolli, Benoit Tremoulinas and Reyes. Adil Rami is doubtful as well.

“Shakhtar, even in the current difficult conditions, continue to play in the Europa League semi-finals. Therefore, I am very proud of my players and my team. It is very important that we continue in the same vein. The support of our fans has been very important to us, and I hope all our fans in the Arena Lviv will be just like the fans of Sevilla in Seville.”

“We face a very difficult match and I don’t think tomorrow will decide the tie. We might be the winners of the last two years of the competition, but we are coming up against a great team.”

According to Head-2-Head statistics, Sevilla has won one and drawn one of the only two previous meetings with Shakhtar Donetsk. Shakhtar have won their last 5 matches in the UEFA Europa League but defeating Sevilla would be hugely difficult for Lucescu’s men.

There have been over 2.5 goals scored in Sevilla’s last three games in the UEFA Europa League and so it should be a high-scoring affair. A 2-2 draw is the most likely outcome of this match which is expected to be closely contested between two strong European sides.