← Manchester United Target Karim Benzema
Who Will Be Sunderland’s Next Manager? → 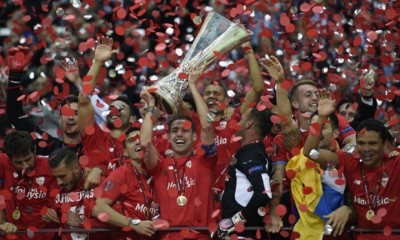 Sevilla defeated Dnipro Dnipropetrovsk 3-2 to lift the UEFA Europa League for the second consecutive season. The Spanish side has been a force to reckon in the younger format of European football, having won it four times in the last nine seasons.

Dnipro, who were playing their first major European final and only their fifth final in any competition, put up a spirited display but could not get rid of the underdog’s tag they were billed before the match.

Sevilla started the match with their usual enthusiastic fervour, probing Dnipro’s backline and creating chances. The footballing Gods had a different outcome in their mind though, with Dnipro scoring the first goal of the game through Nikola Kalinic in the 7th minutes as the handful of Dnipro supporters broke into a loud cheer. Kalinic only started because of an injury to Yevyen Seleznyov, but provided a strong presence in the box, which troubled the Sevilla centre halves. The lead was to last for just more than twenty minutes when Grezgorz Krychowiak levelled for the Spanish side, latching onto a loose ball of a corner and burying it in the bottom corner of the net.

Three minutes later, Emery’s team would take the lead when Carlos Bacca was put through on goal by Reyes and the 38-year-old Colombian forward finished calmly. Reyes would continue to threaten through Sevilla’s right for the entire first hour of the game as Los Rojiblancos displayed exquisite passing, a characteristic Unai Emery has come to be known of.

Dnipro, throughout its amazing Europa League run has showed the strength of character its players possess and the single-minded determination was once again on display as skipper Roslan Rutan equalized one minute from half time. Carlos Bacca, however, secured a win for the Spanish side through his second half goal, breaking the hearts of thousands of Dnipro supporters in the process.

Dnipro’s Europa League run has been one of the amazing footballing stories of the season, as was displayed on the streets of Warsaw by the club’s supporters proudly carrying the Ukrainian national flag. But Sevilla have been in a league of their own in this competition and it was proved once again that Unai Emery is building a special side, one which will compete in the UEFA Champions League next season.