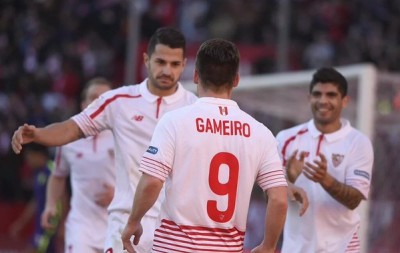 Sevilla will take on Mirandes on Thursday, 21st January in the first-leg of the Copa Del Rey semi-finals at Estadio Ramon Sanchez Pizjuan. The top division side is aiming for its fifth consecutive win but the Segunda B division will pose a tough challenge.

The home side will be without Beto, although the Portuguese has returned to training with the first-team squad. The away side does not have any fresh injury worries and Terrazas is unlikely to make too many changes to the team that faced Deportivo La Coruna. Junior Lago, though, is pushing for a start.

“The Mirandes reached semifinals three or four years ago while in Segunda B. It is a team with a very different identity – daring. They are bold, intense, competing with a very defined and very winning idea. It is a team with important qualities, you have to prepare. There is no question that you have an oversight, no, it’s a matter of who can beat you, because you play to improve yourself.”

“We are against holders of the Europa League but we have enthusiasm and are eager to make a good match. If we have any chance to win the tie we want to put a goal in Seville. If we do not get a goal in Seville it is very difficult to spend the tie.”

According to Head-2-Head statistics, these two clubs have never met before. Los Sevillanos are pushing for their tenth win at home in all competitions while Los Rojillos have eliminated the likes of Malaga and Deportivo La Coruna in the Spanish Cup so far and they are high on confidence ahead of the trip to Andalusia.

On current form, Sevilla are favorites and are likely to win 2-0.