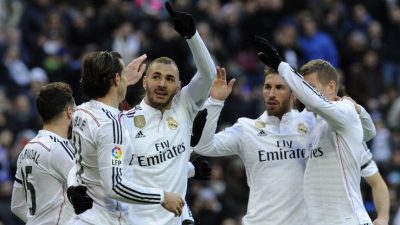 Real Betis are on the thirteenth position with just eight points, having lost two of their last three matches – their previous league game against Real Sociedad ending in a 1-0 defeat.

Real Betis have a completely healthy squad to choose from. Luka Modric, Casemiro and Sergio Ramos are sidelined through injuries for Real Madrid. James Rodriguez and Fabio Coentrao are doubtful as well.

“We will do everything possible to get back to winning ways. I believe in the players’ hard work and drive and they look incredibly focused.

It will be a good game against Betis, it will be a complicated match against tough opposition in a difficult stadium.”

According to Real Betis vs Real Madrid H2H stats, the last five league matches between these two clubs have resulted in four wins for Real Madrid and a solitary draw. In fact, Real Madrid are undefeated in nine of their last ten matches against Real Betis in all competitions, their only loss coming in a 1-0 shocker back in 2012.

Real Madrid are undefeated in their last nineteen La Liga matches. Zinedine Zidane’s side have scored a minimum of two goals in nine of their previous ten away games.