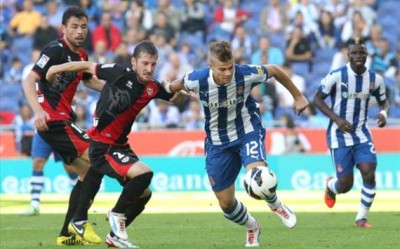 Rayo Vallecano take on Espanyol on Friday, 23rd October in a mid-table clash of the La Liga. Only five points separate the two teams as Espanyol sits at eighth in league standings, while Rayo Vallecano are two places above the relegation zone on fifteenth.

Paco Jamez’s side will look to break their run of three consecutive defeats as they return to La Rosaleda after a 5-2 hammering in the hands of Barcelona at El Camp Nou last week. Espanyol have had a topsy turvy season winning twice and losing twice in their last four matches. The Periquitos pulled off an impressive two-goal victory over Real Betis last week after back-to-back losses against Deportivo La Coruna and Sporting Gijon.

Rayo Vallecano will be without winger Pablo Hernandez (hamstring) and goalkeeper David Cobeno (back) through injuries.

Rayo Vallecano have had a difficult season so far, trailing at both half-time and full-time in five of their previous seven matches. Their leaky defence have been at the heart of their last three losses, conceding at least 2 goals in each of the game. Espanyol tend to attack down their flanks, which gives them an advantage over Rayo Vallecano as the home team has looked particularly prone to width from the opposition.

According to Head-2-Head statistics, Espanyol have won 50% and lost 18% of its matches against Rayo Vallecano. Based on current form, Espanyol are likely to win this match bya 3-2 margin.