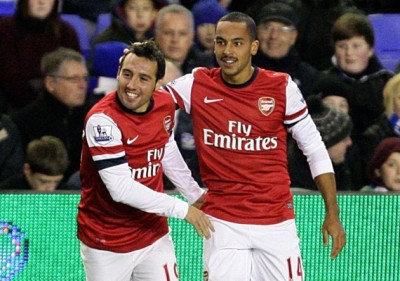 Arsenal face Everton at The Emirates on Saturday, October 24th as the Gunners look to build upon their impressive win against Bayern Munich in the midweek. Arsenal have been in electric form off late, scoring spectacular goals and displaying defensive solidarity simultaneously. Everton, on the contrary are coming off a a poor display in a 3-0 loss against Manchester United.

Arsenal could clinch the top spot of the English Premier League should they win tomorrow while Roberto Martinez would be eager to ensure that his side does not enter a state of free-fall with consecutive defeats.

Jack Wilshere, Tomas Rosicky and Danny Welbeck are Arsenal’s long-term absentees through injury. Aaron Ramsey will join these three on the sidelines after the Welsh midfielder picked up a hamstring injury on Tuesday. Although Gabriel is available after missing the trip to Watford last week, he is unlikely to feature in the starting line-up. David Ospina faces a late fitness test and continues to remain doubtful, while Alexis Sanchez may be rested.

Leighton Baines, Tony Hibbert, Steven Pienaar and Muhamed Besic will be missing for Everton due to injuries. Tom Cleverley, although close to fitness, is unlikely to be in the matchday squad.

The Gunners have turned their season with the victory against Manchester United and will look to continue their positive run. In spite of remaining undefeated in their last five away matches, Everton are likely to lose this tie, with 3-1 being the most probable scoreline.

“We know we’re going to find a team in their best moment of confidence and belief. But in the same manner we need to look at ourselves and react to our performance at the weekend.”