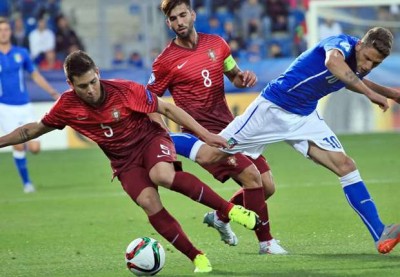 Group B leaders Portugal take on Sweden, eleven years after their last encounter in the same competition at Uherske Hradiste on 24th June, 2015 (Wednesday). Portugal are on four points after they beat England and drew with Italy. Sweden are on three points after they won against Italy and lost to England. Both teams will progress in the event of a draw, but the result of the other Group B encounter will come into play, in case of a win/loss for either side.

Ivan Cavaleiro is available for Porutgal after missing the Italy game due to an injury in the right leg. For Sweden, Alexander Milosević will return from suspension. Striker Isaac Kiese Thelin played the entire ninety minutes against England in spite of his heel injury and may start again, irrespective of the risks involved.

Both nations have quite a few players a single booking away from suspension, namely Joao Mario Eduardo, Gonçalo Paciência and Bernardo Silva of Portugal, and Joseph Baffo, John Guidetti, Filip Helander, Oscar Hiljemark and Abdullah Khalili of Sweden.

Portugal did not come into the tournament with a poor current form, but have been the top bill since their inaugural match against England. Portugal may have scored only one goal registering just five shots on target, but Rui Jorge’s side has dominated for lengthy phases. Sweden will have to be at their absolute best, if they want to salvage a positive result against Portugal. The latter are the favourites to win by a 3-2 margin.