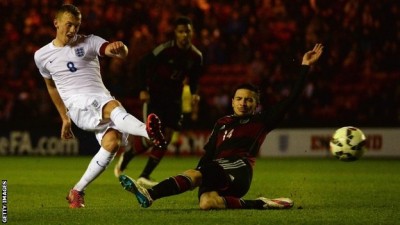 England and Italy come face to face in their concluding Group B encounter, with both teams playing for a semi-final berth in the UEFA Euro U21 competition. While England have won and lost one game apiece, Italy have only managed to win just one point. With Portugal taking on Sweden, a lot of permutations and combinations will come to play.

It is a must-win encounter for Italy, and even then, they need Portugal to beat Sweden. However, England can make it to the next round with a single point as well, provided Sweden does not get a positive result.

The four semi-finalists in the Czech Republic will qualify for next summer’s Olympic Games in Rio de Janeiro. This match will be played on 24th June, 2015 (Wednesday) at Olomouc.

England have a few injury concerns. Saido Berahino withdrew before England’s first match and was replaced by Benik Afobe (Wolverhampton Wanderers). Alex Pritchard limped off against Sweden, having suffered a ligament damage and was replaced by Jesse Lingard, who scored the late winner. Pritchard will play no further part in the competition. The highly-rated Everton centre half John Stones is available after he missed the first two games owing to a concussion injury suffered during training. Reserve goalkeeper Jonathan Bond is also available.

In this year’s competition, both England and Italy have scored one goal each. England have managed nine shots on target to Italy’s seven. Former Middlesborough manager Gareth Southgate took charge of England in 2013 as did Italy’s Luigi di Biagio.

Italy pushed Portugal to the brink during their 0-0 draw, after the surprising defeat against Sweden. England, meanwhile, have shown flashes of brilliance with phases of mediocrity interspersed between. The team which will take its chances on the particular day stands likelier to progress. England are the favourites to win by a 1-0 scoreline.