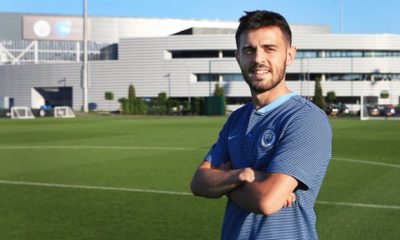 Pep Guardiola has begun his overhaul at Manchester City by making AS Monaco’s Bernardo Silva his first summer signing.

The Spaniard was expected to take the English Premier League by storm in his first season in England but to the utter surprise of fans and pundits alike, Manchester City struggled spectacularly.

Although City started strongly on the domestic front, a leaky defense and a porous midfield meant City would be ruled out contention even before the business end of the season. Pep Guardiola’s side were not much of a force in the cup competitions either – reaching the semi-finals of the FA Cup but getting knocked out of League Cup and the UEFA Champions League early into the knock-out rounds.

More than the tactical setup, the inability of the Manchester City players to execute Pep Guardiola’s plans has been a serious cause of concern for the club hierarchy. Bernardo Silva’s purchase from AS Monaco for a fee of £43.6m will immensely improve Manchester City as a side, for the Portuguese is one of the finest young playmakers in the world right now.

“It feels great. To be honest I’m now at one of the best teams in the world. To be part of this club and to have this opportunity is great. I’m very happy to be part of City’s team and I look forward to trying to do my best to help the team reach their goals.”

The 22-year-old has a silky touch, an impeccable vision, and an absolutely excellent work ethic. Bernardo Silva will not only slot in seamlessly at the No. 10 position, he is touted to be the heir to David Silva who has been an effortless performer for City over the last few years but has struggled with injuries in the last few seasons.

Bernardo Silva is only the first piece of the puzzle with Pep Guardiola expected to buy a string of quality players to challenge for trophies on all fronts next season and also to keep hold of Sergio Aguero, who has attracted interest from a variety of clubs across Europe.