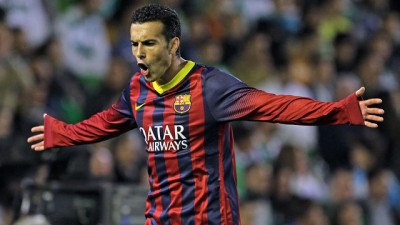 Barcelona could sell Pedro Rodriguez, should a club decide to meet his buy-out clause, admitted Luis Enrique in a press conference earlier today. The 27-year-old Spanish has a buyout clause of around €30m in his contract. A host of Premier League clubs have already been linked to the 2010 FIFA World Cup winner, with Chelsea leading the race alongside Arsenal and Liverpool.

Pedro has been an utility player for Barcelona’s senior squad for seven seasons, having joined the youth setup at the age of seventeen from local club CD San Isidro. A key player for Barcelona B, whom he helped achieve promotion to Segunda Division B. Mostly featuring as a wide forward, Pedro had his breakthrough season in the Catalan colours in 2009/10, during which he became the first player from a single club to score in six different club competitions.

Known for his goal-scoring prowess and poacher instincts in the penalty area, Pedro’s versatility and work-ethic makes him a darling to the Premier League clubs, as he totally fits the idea of a wide forward in high-tempo games in England. A modest, talented footballer, Pedro is bound to increase the quality of any club he joins.

Until last season, Pedro had a buyout clause of €150m, but the Barcelona board adhered to the wishes of the player’s representatives and dropped it to a reasonable one when Pedro signed a new contract through June 2019. A reward for the player’s loyalty, considering the fact that his already diminished game time due to Suarez’s purchase last summer may further fall when the club finally manages to register Arda Turan in January, Pedro admitted last week that Barcelona has received offers for his sale.

Chelsea are expected to launch a formal bid worth £21.4m (roughly equal to his buy-out clause), with Jose Mourinho having personally spoken to the player. Luis Enrique expressed his desire to keep Pedro in Barcelona itself, but also admitted that the player might move in search of regular football and the matter would be out of his hands, if a club offers to meet his buy-out clause.

According to The Guardian, no final decision will be made until 18 July when Barcelona’s presidential elections will take place with Ramon Adell’s current board now blocked from sanctioning transfers, both incoming and outgoing, from the club.