Palermo vs Udinese – Serie A – Preview 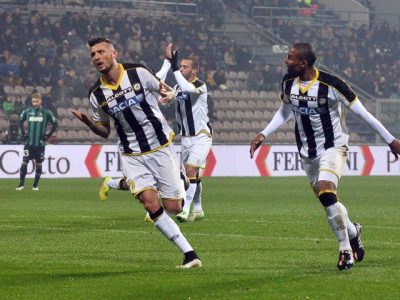 Palermo vs Udinese – Udinese travel to Renzo Barbera on 27th October, Thursday to face Palermo in a Serie A fixture, with both clubs fighting for their spot in the Italian top division.

Palermo are eighteenth in league standings with six points and only one win so far. Three of Palermo’s last four matches have ended in a loss, the Rosaneros conceding four goals each against Roma and Torino in the last two games.

Udinese have not fared much better – the Bianconeri Friulani have ten points courtesy three wins and now sit on the sixteenth position. They broke their five game winless streak with a 3-1 victory over Pescara in the last match.

Giancarlo Gonzalez, Aleksandar Trajkovski, Slobodan Rajkovic and Norbert Balogh are sidelined through injuries for Palermo. Sinisa Andjelkovic has been listed as a doubt.

Udinese will be without the injured Pablo Armero and Panagiotis Kone.

“It will be a difficult game. Palermo have never won at home, but will have a great public support. It will be an intense match. We are happy that the league has no certainties, because it gives you to be able to make up time.”

According to Palermo vs Udinese H2H stats, the previous five meetings between these two clubs have resulted in three wins for Palermo and only one win for Udinese. While Udinese have failed to win thirteen of their last fourteen away matches in the Serie A, Palermo have lost their last four home games.