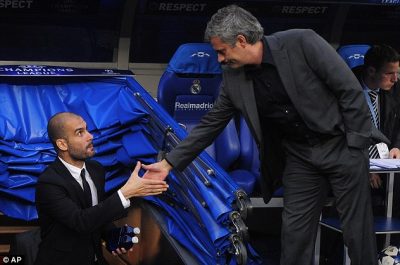 Both the clubs are struggling at the moment with all eyes on Jose Mourinho and Pep Guardiola to see how the legends of modern football help their teams out of their current predicament. While Manchester City are winless in their last five matches in all competitions, Jose Mourinho suffered his worst Premier League defeat ever when his former club Chelsea defeated Manchester United 4-0 this past weekend.

Eric Bailly and Marouane Fellaini joins Phil Jones on the sidelines while Wayne Rooney and Morgan Schneiderlin will face late fitness tests. Henrikh Mkhitaryan could be handed his first start after a lengthy spell on the sidelines.

Bacary Sagna, Pablo Zabaleta and Kevin de Bruyne will be absent for Manchester City. Fabian Delph has been listed as a doubt.

“Derbies are always special. We are going to try to play seriously and try to win the game.”

According to Manchester United vs Manchester City H2H stats, the last five meetings (all of which came in the Premier League) between these two clubs have resulted in two wins and a solitary draw for either side.

In the League Cup encounters, Manchester United have won only two of their six previous encounters with Manchester City, with three games resulting in losses.

It should be a closely contested affair but based on current form, the visitors are likely to win 1-0 tonight.