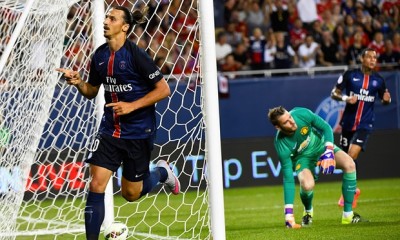 Manchester United started with a spring in their step, but their failure to be clinical in front of the goal cost the Red Devils dearly. Bastian Schweinsteiger started, having shaken off the minor injury which kept him out of the win against Barcelona. Memphis Depay played in the No. 10 position with Wayne Rooney up front. Although the Dutchman and the United captain posed the biggest threats to the Parisian defence, both are yet to develop an understanding which will win Louis van Gaal’s team matches.

The manner in which Manchester United let in the goals would worry van Gaal. Blaise Matuidi did not pose any danger when he chased the ball in the United penalty area. However, a mix-up between David de Gea, Luke Shaw and Phil Jones allowed Matuidi to score the opener at the 25-minute mark.

More compounding was the fact that David de Gea was withdrawn after only 45 minutes. Manchester United have recently signed Sergio Romero, but it is widely expected de Gea will still be in United colours come September. Should United wish to win right from the word ‘go’, David de Gea needs to be at his absolute best, considering United’s wobbly defense. Yet the Spaniard has played less than 120 competitive minutes in the pre-season.

The substitution of fourth-choice Johnstone in the second half belied United’s problems in spite of an impressive transfer window. Louis van Gaal has lamented the lack of a top forward in his team and the profligacy of the attackers just corroborated van Gaal’s words.

Matteo Darmian and Juan Mata had combined to play in Rooney and Depay a few times, but without much avail. Andreas Pereira’s inclusion in the second half added some spark, but the goal eluded United. The closest the Premier League club came to scoring was through a Memphis Depay free kick, but Kevin Trapp, the Paris Saint-Germain goalkeeper was able to see it through.

With less than ten days for the Premier League season to kick off, Manchester United are still a few pieces away from completing the jigsaw puzzle which is their squad.