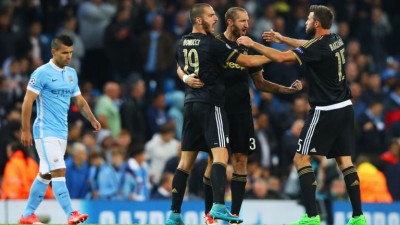 Manchester City will face a real test of character as they travel to Turin, Italy to face the Serie A champions Juventus in a Group D fixture of the UEFA Champions League on Matchday Five.

Manchester City are on top of the group table with nine points, having won all their three matches ever since the 2-1 loss at home to Juventus. The Old Lady are on eight points, having played out two consecutive draws against Borussia Monchengladbach after wins on the first two matchdays.

Roberto Pereyra, Kwadwo Asamoah and Simone Padoin are the confirmed injury absentees for the game. Juventus are unlikely to have Patrice Evra and Martin Caceres available as they nurse knocks, while Sami Khedira has been training away from the main group over the last week and Hernanes is suspended having been sent off in their last Champions League outing.

Manchester City have travelled without as many as six senior players. Wilfried Bony, David Silva, Vincent Kompany, Elaquim Mangala, Paulo Zabaleta and Samir Nasri have been ruled out of the crucial away game.

“It’s an important game that could determine who tops the group. We’ve got to aim to win as it’s the only result that guarantees us qualification. Our three successive league wins show progress.  We’ve not done anything in the Champions League yet, and we’ve still got a battle with Sevilla to come. It’s all wide open.”

“It’s very important to qualify for the third time in a row – and this year it’s important to be top of the group. It’s a test for us tomorrow to try to win in a difficult stadium, to win the group and to beat [Juventus] here.

The most difficult thing tomorrow is the quality of the players that Juventus have. They have a very strong squad, which is why they reached the final last year. We will find a team who want to qualify in first position in the group, but they will find a Manchester City who will fight and give them a game.”

According to Head-2-Head statistics, Manchester City have not won in their previous three encounters with Juventus – two draws and one loss for the English side. Juventus are likely to win, with a 2-1 result being the most probable.