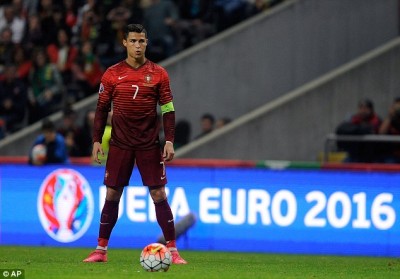 Portugal vs Latvia – Portugal hosts Latvia at the Estádio Algarve on 13th of November in a Group B fixture of the 2018 FIFA World Cup qualifiers for the UEFA nations.

Portugal have six points from their opening three games, having begun their campaign with a 2-0 loss against Switzerland which were followed by two 6-0 victories against Andorra and Faroe Islands.

Latvia are fifth in the group standings, their only win coming against Andorra on Matchday 1. Switzerland are currently leading the charts with nine points in their first three matches.

With only the group topper among the UEFA nations progressing automatically to the World Cup, these three points are crucial for the European Champions to set their campaign up for next year.

“Portugal has many young players, who are growing. They need time to realise their full potential. By playing games, gaining experience and playing together they will only improve.

Speaking personally, I look with lots of enthusiasm and optimism at the fact we have so many quality players emerging now, and I’m very optimistic that in the future we will be stronger, for sure.”

According to Portugal vs Latvia H2H stats, Portugal have won all of their previous four meetings with Latvia. The last time these two clubs met were during the qualifying campaign for the 2006 FIFA World Cup and Portugal won both legs scoring five goals and conceding none.

For Latvia, thirteen of their last sixteen matches in all competitions have seen less than four goals scored. Portugal are the clear favorites and are likely to win by a 3-0 scoreline.