How Does Kovacic Fit Into Real Madrid Squad? 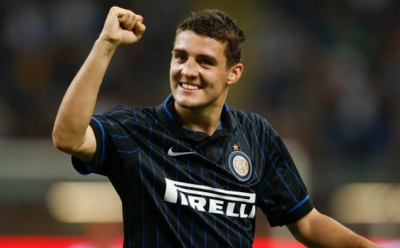 In continuance with the tradition of signing the brightest young midfielders in Europe, Real Madrid snapped up Mateo Kovacic from Internazionale for an initial fee of €32m, with further €3m as add-ons.

A creative dynamo by all measures, Kovacic is a player in a similar mould as James Rodriguez and Isco. While the Croat’s technical abilities vary subtly from his national team-mate Luka Modric and German midfield maverick Toni Kroos, there is a strong feeling in Bernabeau that Florentino Perez stocked up in the one position where Real Madrid did not need any strengthening.

An excellent dribbler of the ball, Mateo Kovacic first rose to prominence at Dinamo Zagreb where his playmaking abilities were appreciated by all. A move to Inter Milan provided Kovacic the opportunity to test himself in the technically deft, yet stylistically old-school Serie A. Kovacic averaged around 2.6 dribbles every ninety minutes last season, completing over 60% of his take-ons.

The 21-year-old boasts of exemplary close control of the ball and his ability to manoeuvre through tight pockets of space between the defensive channels is what makes him a potent threat while a team is attacking.

In spite of shying away from through-balls and long diagonal passes, Mateo Kovacic is a competent distributor, his short, precise passes always playing a crucial role in unlocking defenses. Kovacic’s versatility was on display during his three seasons at San Siro with the Croat playing almost every central midfield position. Kovacic has surprisingly looked comfortable and produced his best, irrespective of whether he has started as a #10, #8 or #6. This will prove to be a huge asset to Real Madrid as the Los Blancos now lay claim to a wide variety of midfielders, who can control the tempo from any area of the pitch, the opposition’s tactics notwithstanding.

For all of Mateo Kovacic’s qualities, physical prowess is not his strong suit. He might not be a defensive stalwart and is a reluctant tackler, but is extremely suited to a high-tempo game due to his quick feet and vision. It took Kovacic close to twenty months to score his first Serie A goal, but comparisons have already been drawn to Andres Iniesta for the similarities in the style of play of both midfielders.

Kovacic has a calm head on his shoulders and has always expressed the right temperament to succeed. Mateo Kovacic is being lined up as an eventual replacement for Luka Modric, just like the elder Croat himself accepted, and should the youngster continue his development in the next few years, Real Madrid have landed themselves one of the potential midfield greats in Europe.