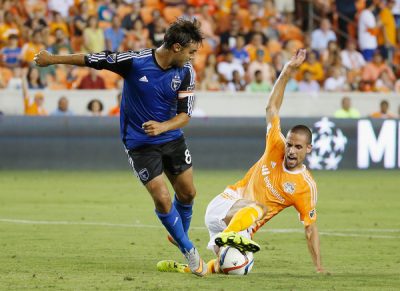 Houston Dynamo take on San Jose Earthquakes at the BBVA Compass Stadium in Houston, Texas on 31st July, Sunday in a Western Conference fixture of the Major League Soccer. The Dynamos are currently perched at the bottom of the Western Conference league table with nineteen points after twenty games.

Having won only four of their matches so far, the Houston Dynamos have struggled to convert their draws into wins through out the season, mostly because of the lack of goals upfront.

The Houston Dynamo vs San Jose Earthquakes match has a number of interesting subplots surrounding it, the most notable being the presence of Wade Barrett and Dominic Kinnear on the opposite touchlines. Wade Barrett has previously played under and been mentored by Kinnear during the latter’s managerial reign at Houston.

Ever since Barrett took over the reigns of Dynamos, the club winning the race for the wooden spoon has kept five consecutive clean sheets at home. Houston played out a 0-0 draw against Vancouver Whitecaps in their last game and although a similar performance would not lift them off the bottom of the table, it would set a new club record for not conceding at home.

The San Jose Earthquakes failed to win their last match as well, their game against Real Salt Lake finishing 1-1, putting Kinnear’s side at eighth position with twenty-six points. Houston’s new signing Yair Arboleda is expected to make his debut on Sunday while Earthquakes’ Kofi Sarkodie is likely to return from his injury.

According to Head-2-Head statistics, Houston Dynamos have won eight and lost seven of their sixteen meetings with San Jose Earthquakes. The last time these two teams met was in May when Alberto Quintero found the net twice to lead the Earthquakes to a 2-1 win.

With the San Jose Earthquakes still looking for their first away win of the season, a 1-1 draw is the most likely result.