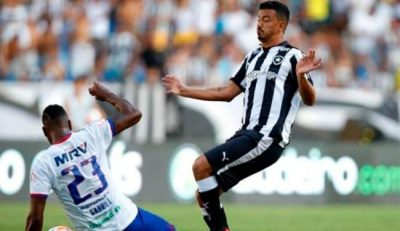 The struggling Botafogo hosts league leaders Palmeiras at Estádio Olímpico João Havelange in Rio de Janeiro on 31st July, Sunday in one of the most anticipated Brasileiro Serie A fixtures of the weekend.

Botafogo, who were promoted to Serie A last season, are now firmly entrenched in the relegation zone on the eighteenth position with only seventeen points from their four wins of the sixteen matches played so far. Palmeiras, on the contrary, have cruised through the first half of Brazil’s top division winning ten matches to amass thirty two points.

Ricardo Gomes’ side will be without Jefferson, Emerson Silva, Gege, Leandro Barbosa, Sassá and Rodrigo Pimpão, all of whom are suffering from injuries. Palmeiras have travelled without the suspended Tche Tche and the injured Yerry Mina.

Botafogo have struggled to score goals this season, finding the net on twenty occasions only. Although they showcased a brilliant performance during their midweek win against Bragantino in the Brazil Cup, it will be a tough ask to beat Palmeiras (who only need a draw to remain on the summit of the Campeonato Brasileiro).

According to Head-2-Head statistics, Palmeiras have won 40% and lost only 27% of their matches against Botafogo so far. The last time these two clubs faced each other in the league was in late 2014 when Palmeiras defeated Botafogo in a close 1-0 win through a second half goal from Henrique Dourado.

Botafogo’s last win over Palmeiras came in that very season when they won 2-0 in the reverse fixture after Palmeiras’ Wesley saw a red card. Palmeiras are likely to win tomorrow with 2-1 being the most probable scoreline.