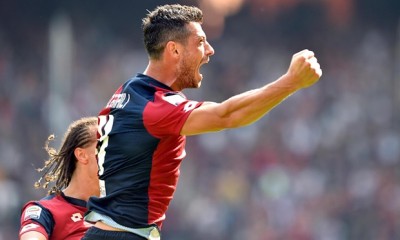 AC Milan’s harrowing start to the domestic campaign continued as the Serie A club lost to Genoa in a 1-0 affair. An early strike from Blerim Dzemaili pushed Milan onto the backfoot and the club never recovered, with Alessio Romagnoli’s sending off before the half-time added insult to injury.

AC Milan started in a 4-3-1-2 formation with Giacomo Bonoventura playing in the hole behind the strikers Mario Balotelli and Luiz Adriano. While Riccardo Montolivo, Nigel de Jong and Andre Baertolacci rounded off the midfield, Genoa started in a 3-4-3 formation with Leonardo Pavoletti and Diego Carpel up front.

It was Genoa’s second win only, and the three points could prove to be pivotal in what is touted to be a close relegation battle come next summer. Genoa were placed at a lowly seventeenth before kick-off, but started brightly. Capel’s shot was just wide off the post after Dzemaili had found him in a set-piece situation just after six minutes. Four minutes later, the Genoa midfielder found himself on the scoresheet as Dzemaili’s free kick deflected off Giacomo Bonaventura onto the goal, rendering Diego Lopez completely helpless.

Milan responded swiftly, but clear cut chances were difficult to come by. Bonaventura shot over the bar while Mario Balotelli headed wide. The Rossoneri’s pursuit was hampered when Romagnoli was given the marching order after using his arm to challenge Capel, after Christian Zapata had given the ball away. It was Romagnoli’s second punishable offence and it was a blow Milan could not recover from.

Bonaventura and Balotelli continued to attempt shots, but neither were particularly successful in troubling the Genoa goalkeeper. Capel had a chance to put the game out of Milan’s reach but the Genoa forward’s shot was off target.

Milan continued to fluff the chances which came its way and the clock ran down, as substitutes Juraz Kucka and Rodrigo Ely both shot high over the bar. Milan should have comfortably won against a side of Genoa’s calibre, but their poor finishing cost them dearly. Although Milan registered 12 shots in total as compared to Genoa’s 11, majority of them failed to find the target. The Rossoneri have made it a habit in the last few matches to concede free-kicks and gve away fouls at dangerous positions.

Milan’s third defeat of the campaign came at the hands of an unlikely opponent, as the Serie A continues to surprise fans and pundits across the world with its host of shocking results.