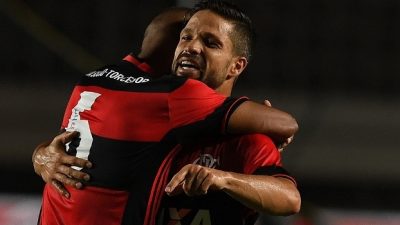 Flamengo vs Santa Cruz – Flamengo hosts Santa Cruz at the Maracanã, Rio de Janeiro in a Brasileirao match as they aim to close the gap on league leaders Palmeiras. With Palmeiras playing America MG, who are at the bottom of the table, Flamengo must win to keep challenging for the title.

Rodinei, Ederson and Juan are sidelined through injuries for Flamengo while Jorge and Leandro Damiao are suspended. Alex Muralha and Paolo Guerrero are on international duty. Santa Cruz will be without the injured Alemao, the suspended Danny Morias, Neris and Matias Pisano. Alex Vieira and Tiago Costa are doubtful but are likely to start, although they might face late fitness tests.

According to Flamengo vs Santa Cruz H2H stats, Flamengo has won only one and lost two of its last four encounters with Santa Cruz. However, Flamengo have won their last eight home matches in the Brasileirão.

Meanwhile, Santa Cruz lost their four away matches in the league – they were defeated 3-1 by Figueirense. Santa Cruz have conceded at least three goals in their previous three away matches in the Brasileirão and their upcoming match with Flamengo is expected to be a high scoring encounter, especially with Flamengo scoring at least twice in six of their last seven home matches.

Flamengo will start as clear favorites and are likely to win by a 4-2 scoreline.