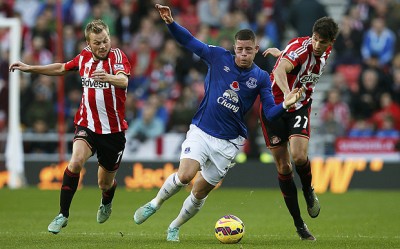 Everton host Sunderland at the Goodison Park as the Toffees aim to bounce back from their sudden blip in the English Premier League campaign. Everton have lost to Manchester United and Arsenal with shoddy performances in their last two league matches and now sit on eleventh position in the table with thirteen points.

Sunderland ran out 3-0 winners at the Tyneside derby last weekend, but have been far from convincing as they have been embroiled in a relegation battle since early days of the season. The Black Cats are eighteenth in the league standings with only six points after ten matches.

Tony Hibbert and Phil Jagielka are still sidelined for Everton. Leighton Baines, Muhammed Besic and Tom Cleverley have returned to training but the fixture is too soon for the trio to regain complete match fitness. Should a stomach infection keep Semaus Coleman out of the lineup on Sunday, Tyias Browning could feature. Steven Pienaar is classified as a doubt for the match.

Fatigue will play a crucial factor as the Toffees were stretched up to penalty shootout after extra-time during their League Cup victory over Norwich on Tuesday. Gareth Barry will return from suspension, as will Tim Howard even though No. 2 Joel Robbels put in an impressive display in midweek.

Fitness is a serious concern for Sunderland boss Sam Allardyce as well. While Adam Matthews has been already ruled out of the fixture, as many as six players including John O’Shea, Younes Kaboul, Ola Toivonen, Jack Rodwell, Duncan Watmore and Fabio Borini are doubtful for tomorrow’s trip to Merseyside.

According to Head-2-Head statistics, Everton have won only two of their last six meetings with Sunderland, with the relegation-threatened club winning three of those. However, this will be the perfect opportunity for Roberto Martinez’s men to end their run of defeats as Sunderland have failed to score in their last three away games this season. Sunderland have also lost five of their previous six matches on the road, so the scales are tipped heavily in favour of Everton. The Toffees should win comfortably, with a 2-0 scoreline being the most likely outcome.