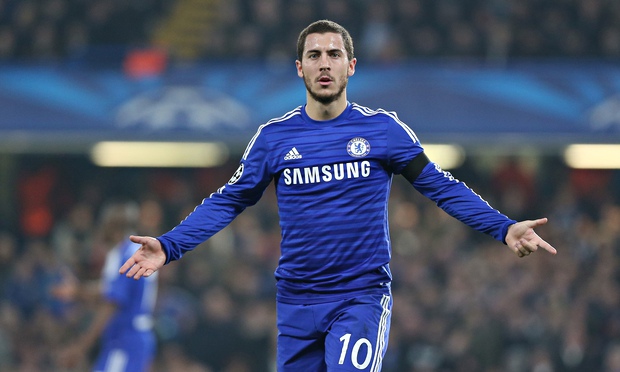 As the Premier League season steps into the business end, it also marks the time for the personal honours. The Professional Footballer’s Association released its shortlist for the ‘Player of the Year’ and the ‘Young Player of the Year’ nominations earlier today.

Eden Hazard, Chelsea’s star playmaker who has been consistently excellent throughout the season heads the shortlist. He is joined by Chelsea team-mate Diego Costa and Arsenal winger Alexis Sanchez at the top of the nominations.

The shortlist also includes David de Gea (Manchester United), Philippe Coutinho (Liverpool) and Harry Kane (Tottenham Hotspur). Although Harry Kane has been a revelation for Spurs, Costa and Sanchez have had debut Premier League seasons exceeding fan’s expectations, it has been widely tipped that Eden Hazard is the likeliest to walk away with the prestigious PFA Player of the Year award.

Fellow Blue Oscar had some words for his compatriot. “In my opinion he is the best player in the Premier League at this moment. It’s very hard pointing out who’s the best here or there, especially here with so many good players. But Hazard has been so consistent and he deserves to be considered as the best player in England,” reported Goal.

The FA also released the shortlist for the ‘Young Player of the Year’ award, which includes Thibaut Courtois (Chelsea), David de Gea (Manchester United), Philippe Coutinho (Liverpool), Harry Kane (Tottenham Hotspur) and Raheem Sterling (Liverpool). Harry Kane, after his breakthrough season for the Spurs, is the first choice in most circles to be the ‘Young Player of the Year’.