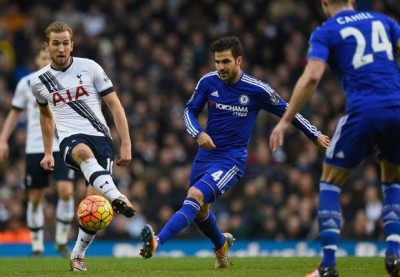 Chelsea hosts Tottenham Hotspur at the Stamford Bridge on 2nd May, Monday with the visitors absolutely needing a win to keep their English Premier League title chances alive.

Tottenham Hotspur are on sixty nine points, seven points behind Leicester City who played a 1-1 draw at Old Trafford on Sunday. Chelsea are on the tenth position with forty seven points and will be playing for their pride against derby rivals Spurs.

Chelsea won their last match against AFC Bournemouth in a convincing fashion, but Tottenham Hotspur drew against West Bromwich Albion.

Kurt Zouma and Loic Remy are still sidelined through injuries. Thibaut Courtois serves his final match of the two-match suspension. John Terry and Gary Cahill have returned to training and are likely to be a part of the matchday squad.

Nabil Bentaleb is Tottenham Hotspur’s only major injury concern while Eric Dier is carrying a knock. Dele Alli is suspended.

“We desperately want to win the next game, which is Spurs, and then there are massive games against Sunderland, Liverpool and Leicester after that. It’s normal to have scrutiny from the press because you are playing in the limelight.

We want to fulfill our obligations now, and in the upcoming games. I cannot guarantee the result but I can guarantee that the effort will be there, and not just on Monday.”

“We can feel a little bit disappointed because the gap behind Leicester is big, but realistically we have a very good, young squad. If it is not possible to win the title this season, we need to try next season.

The potential of the club and the squad we have is massive, and the important thing is to build the project and philosophy and to settle the basis.”

However, Tottenham are undefeated in fifteen of their last sixteen Premier League away matches. Although the visitors will start as firm favorites considering Chelsea’s woes this season, a 2-2 draw is the most likely result.