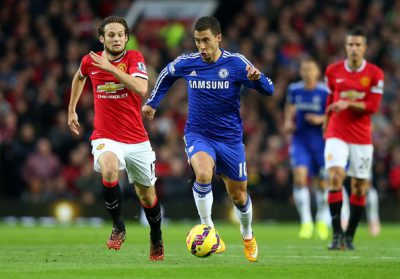 Chelsea vs Manchester United – Jose Mourinho returns to Stamford Bridge less than a year after he was let go by the board when Chelsea host Manchester United on 23rd October, Sunday in an English Premier League fixture.

Chelsea and Manchester United are just two points apart in the English Premier League standings, the former on the fifth position with sixteen points while Manchester United are seventh with fourteen points. After a couple of difficult defeats at the hands of Liverpool and Arsenal, Chelsea seem to have found their feet again with consecutive wins against Hull City and Leicester City.

Manchester United put a halt to Jurgen Klopp’s marauding Liverpool through Jose Mourinho’s pragmatic approach this past week, but will be playing their third match in six days and would need to fight off fatigue.

John Terry returns to the fold for the hosts. Kurt Zouma is yet to regain match fitness and Marco van Ginkel is still nursing an injury. Phil Jones is Manchester United’s only injury concern.

“I have great respect for him. He won three championships and I think he was an important man for the club. I think he deserves a good reception, because he wrote with the club, with his players, with the staff part of the story of this club.”

However, Jose Mourinho’s Manchester United could expose Chelsea at the back and stifle the playmaking abilities of Hazard and Costa. A 2-1 win for the visitors is the most likely result.